The first in a series of lectures on the subject of digitalisation was presented at the Landshut University of Applied Sciences last Thursday. The presenters touched upon everything from the technical foundations to ethical issues. One hotly debated topic was autonomous driving.

"You'll leave here today with more questions than answers" quipped Johannes Krosch at the start of the event. Krosch, Coordinator for General Studies Courses at the university, served as moderator during the initial lecture of the series on digitalisation, accompanied simultaneously by a sign language practitioner.   "Digitalisation", Krosch summarised, "will significantly change society and our lives". The Landshut University of Applied Sciences even devoted an entire semester to the subject: As Prof. Karl Stoffel said in his welcome address, other events, such as the Founder's Evening and the Day of Teaching, will also be engaging with the subject.

Why exactly are we in the process of digitalising data? What are the benefits? "Digitalised data is not subject to wear and tear when used, copied or stored", explained Prof. Dieter Nazareth, Dean of the Computer Sciences Faculty. "An eReader, for example", he continued, "never gets dog-eared or stained like a normal book". For this, one accepts the fact that digital data comprises less information than analogue media. Nazareth cites the mercury thermometer as an example: theoretically, it could indicate the temperature within infinite precision. The accuracy of digital thermometers, by contrast, is restricted to a single decimal place. As Nazareth concludes: "We impose limits on our infinite universe, because any computer has a finite storage capacity. We simply discard the finer detail".

He referred to the year 2002 as a milestone: since then there has been more digital than analogue data in the world. According to Nazareth, there is no way back. The second presenter, Prof. Gudrun Schiedermeier, opined that those who miss the digital revolution will flounder. She referred to Quelle, a German mail order firm, as an example: "Their business model was similar to that of Amazon", said Schiedermeier: "But Quelle continued to bet on the catalogue instead of embracing digital media".

These days it is not even necessary to order products oneself. So-called smart devices relieve people of the need to think for themselves. A smart fridge, for example, might suggest a recipe, play an instructional video, and order the ingredients online. Yet, the security standards need to keep pace with the technical progress. "Computer scientists still have a lot to do in this context", Schiedermeier explains, who points out that there are also ramifications for society at large: "It has even been suggested that future robots might pay taxes, which would provide people with income".

What precise role does mankind play in the digitalised world? This question was raised by theologian and University Chaplain Dr. Alfons Hämmerl as an adjunct to the technical thrust of the lectures. "Communications are becoming increasingly interactive", said Dr. Hämmerl, "everyone can reach anybody any time: that is now normal!" That has an impact on how people define the private sphere, he continues, or how they manage their work-life balance. Political engagement and discourse are also changing, according to Dr. Hämmerl, who cites the example of the use of online networks by rebels in the so-called Arab Spring to coordinate uprisings and revolutions against authoritarian and corrupt regimes.

How Can the Digital World be Reconciled with Human Dignity?

The theologian struck nerve when he touched upon the subject of driverless vehicles: "How", he asked, "should a vehicle decide if, for example, it is faced with the choice of mowing down either one person or a group of three?" The decision would have to be encoded in the algorithms used in the vehicle software. A student's counter question as to whether: "software engineers ought to transfer their own ethical values to machines" triggered a range of conceptual lines of thought among the 70 or so audience members. How can one mandate values, decisions and algorithms in a democratic and legally binding manner. Should the car also brake for a cat – and what if it's the driver's own pet? Moderator Krosch's opening statement was quite right – there are more questions than answers. 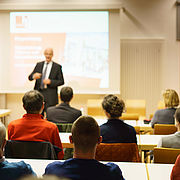 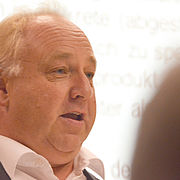 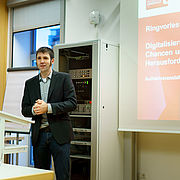 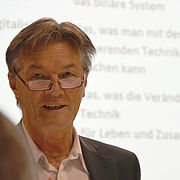 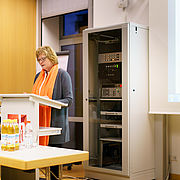 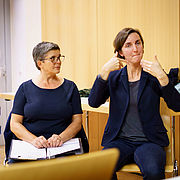