Biogas facilities are important drivers for the energy transition, yet, for many operators, they are no longer profitable. Conversion to biomethane can make such facilities more flexible and energy efficient ? as well as opening up new business segments to the operators. Researchers at the Landshut University of Applied Sciences and the Weihenstephan-Triesdorf University of Applied Sciences have developed just such a process.

Germany is scheduled to be generating 55 to 60 per cent of its electrical power from renewable energy sources by 2025 – currently it is around a third. However, photovoltaic systems only achieve their full capacity during the day in summer, and wind energy plants are usually only viable in exposed areas. The power demand during the dark winter months outstrips the production capacity of renewable sources. To some extent, biogas plants can compensate for these fluctuations and help to secure power continuity. ??

"The advantage of biogas plants is their flexibility", explains Dr. Josef Hofmann, Professor of Energy and Environmental Engineering at the Landshut University of Applied Sciences: "They can generate both heat and power as required, and can feed into the national power grid or else store the energy as biogas during power surplus periods". Yet, what is required at the moment is, above all, operational continuity rather than flexibility. Operators can currently count on a fixed tariff for power supplied to the national grid 365 days a year.

This arrangement is scheduled to end in 2020. In Hofmann's estimation: "at that point many facilities will stop being economically viable unless operators reconsider their approach". His solution: convert biogas to liquid biomethane. The point, according to Hofmann, is that: "Biomethane is a thousand times more energy rich than biogas". That makes the liquid highly desirable as an energy reservoir. It can be stored for months in a stable condition in thermally insulated tanks. When required – for example during the cold, dark winter – it can then be transformed into heat or electrical power. "The liquid can be stored far longer and more efficiently than biogas", Professor Hofmann concludes.

Together with colleagues from the Landshut University of Applied Sciences and the Weihenstephan-Triesdorf University of Applied Sciences in Freising, he has developed an appropriate conversion process, which involves cooling pre-refined biogas to minus 162 degrees centigrade over a number of discrete steps. This process results in two components: liquid biomethane and solid carbon dioxide, i.e. dry ice. Korbinian Nachtmann, who works on this project as a Ph.D. student, explains: "Using our process, we are able to obtain biomethane that is 99.9 per cent pure. As such, it would also be of interest to the chemical industry as a raw material for such things as the production of basic chemicals such as hydrogen or methanol". It could also be used as a more environmentally friendly alternative to fossil fuels, which opens up new business segments to biogas plant operators in addition to power and heat production.

Before the biogas can be separated out, the scientist have to purify it thoroughly. That was the task of the Freising-based team led by Prof. Oliver Falk of the Weihenstephan-Triesdorf University of Applied Sciences. "Even the tiniest impurities could freeze during subsequent steps and damage the plant", the engineer explains. Above all, hydrogen sulfide is an unwelcome element in biogas. The scientists tested and cleverly combined various ferric compounds and activated carbon filters to remove it. The result in the words of Prof. Falk: "There is now no trace of hydrogen sulfide discernible within the biogas. In other words, it contains less than one part per million of the compound". That is the equivalent of a grain of salt in a litre of water. The refined gas then flows into a laboratory system specially developed by Prof. Falk's colleagues at the Landshut University of Applied Sciences. This man-high structure of silvery tubes and copper-coloured connectors is the embodiment of process and material know-how from the entire university. For example, two students discovered the perfect coating for heat exchangers, a crucial development to ensure that carbon dioxide crystallises there in the form of snow rather than ice, because snow can simply be brushed off. A layer of ice, on the other hand, would mean regular defrosting – just like a kitchen freezer – which would increase energy consumption.

Dry Ice as a Marketable By-product

In their final assignment, the students discovered that Teflon-coated heat exchangers form the optimum carbon dioxide snow, which biogas plant operators can sell on as dry ice. Dry ice is used to cool foodstuffs in aircraft, for example, and for cleaning the surfaces of plastics and metals in the synthetics and steel industry. This is how an experiment with a variety of heat exchangers and coatings looks (optimal: the second column from the left, where the frozen carbon dioxide falls off as a fine snow):

Thus, the gas refinement and separation process works perfectly in the laboratory. The researchers now want to apply the same principles at the biogas plant scale, to which end they plan to construct a demonstration facility in Landshut starting in 2017. Hofmann sees a future for biogas facilities in this process: "Biomethane is much easier to store and transport than biogas", he explains: The plant operators can become more flexible whilst continuing to contribute towards the energy transition and climate-friendly mobility". 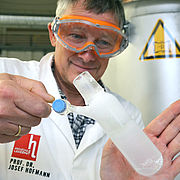 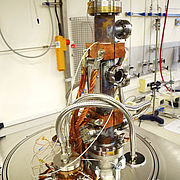 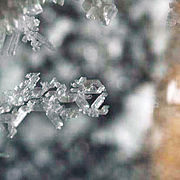