Ten Years on from the Abuse Scandal - What Have We Learned?

Landshut University of Applied Sciences invited participants to its “Dialogue on the Blue Sofa” series of event with Father Klaus Mertes and Professor Dr. Jörg Fegert.

On 28 January 2010 the Berliner Morgenpost newspaper printed a letter from Father Klaus Mertes, former Rector of Berlin’s Canisius College Jesuit Grammar School, which was addressed to 600 former pupils from the 1970s and 1980s. The subject of the letter was cases of abuse at the school that three former pupils had recently reported to him. Exactly ten years to the day, Father Klaus Mertes sat, along with Child and Youth Psychiatrist, Professor Dr. Jörg Fegert of Ulm, on the “Blue Sofa” in Salzstadel Platz, to discuss the events and their consequences.

Just how much the subject of child abuse in Catholic boarding schools still concerns society even ten years after the debate first began, was shown by the large attendance in the Salzstadel. The around 100 audience members closely followed the remarks of Father Mertes, who described the start of his meeting with the three Canisius College alumni. “I had already heard rumours of such incidents,” said Mertes, “but with the revelations of the three now grown men, a whole new world was unveiled to me.” It was a gut feeling that led him to write the open letter. “At that time I did not expect the magnitude of the events that would unfold,” added Mertes.

“I can only congratulate you on your gut feeling,” replied Fegert. For over 30 years, he and colleagues in the field had researched child abuse - far away from public attention. “It is only thanks to you that the taboo was lifted from discussing this subject.” Fegert, however, did not wish to limit the discussion solely to the Church, and pointed out that cases of child abuse arise in every institution: hospitals, schools and within the home.

Both Fegert and Mertes criticised the fact that, in this connection, far too often attention is only paid to the perpetrator. “All too rarely is any interest shown in those affected,” complained Fegert. “Purely concentrating on the offender is a typically German phenomenon.” Mertes explained this fact with the German culture of silence and need for harmony within society: “Abuse is always linked to marginalisation from the community. Nobody wants to hear these stories in a functioning, healthy world.”

After the publication of his letter, many victims contacted Father Mertes. “As a result it became clear to me for the first time that in an abuse scandal one victim does not mean that there is only one perpetrator, but that there may be one perpetrator and 40 or 50 victims.” According to Mertes, many of those affected had not come to terms with what had happened to them, even after more than seven years. “I still meet with them today.”

Fegert stated that child abuse remains a societal problem. People in authority, such as priests, doctors and teachers, have a kind of protective shield, in his view. Fegert expressed his incomprehension by saying, “How often do we - unfortunately - hear: ‘That is not the way to speak about a priest’ or ‘a doctor has to touch you to make you better’”?

Nevertheless, Mertes looked to the future with confidence and expressed his optimism that a similar abuse scandal will not be repeated in the Church. “I draw my optimism from the power of the voices of the victims,” said Mertes. However there would still need to be a degree of change in the Church as an institution. “An administrative jurisdiction is needed that is independent of the institution itself.” The monarchical principle, according to which only clerics can sit in judgement upon clerics, has long been outdated.

Fegert agreed with Mertes and transferred his demands to other institutions. As an example he mentioned the case at Landshut District Hospital, where patients were restrained excessively often. Here too, he saw a need for regulatory bodies, and, for example, complaint procedures or a visiting commission.

“What we have learned from the scandals is that protection plans in institutions are increasingly important - not only in the Catholic Church,” said Fegert. From the research projects for the implementation of protection plans with Landshut University of Applied Sciences and the University of Hildesheim, it was evident that protection plans cannot be limited to appointing a prevention officer and then allowing a plan to disappear in a desk drawer. The participants on the sofa were in agreement that authorities need to recognise their responsibility for ensuring that people in institutions are protected.

Podium discussion with the general public

Following the remarks by Professor Dr. Fegert and Father Mertes, the public had the opportunity to ask questions. This showed the enormous interest in the subject of the event. The contribution of a former Regensburg Cathedral chorister, who spoke movingly of his own abuse, was particularly memorable. 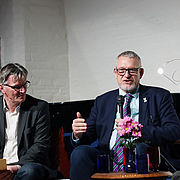 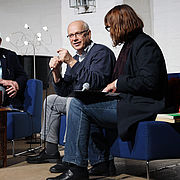 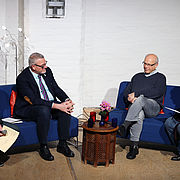