Technology for the cars of tomorrow

In future Landshut University of Applied Sciences wants to focus more strongly on automotive as a strategic priority. The automotive engineering laboratory is to play an important role in this. Prof. Christian Koletzko is one of the key players working there on cutting-edge topics such as autonomous driving and advanced chassis engineering.

Koletzko joined Landshut University of Applied Sciences in February. Around 400,000 euros has been spent over the past year on upgrading the laboratory for automotive engineering and the powertrain laboratory. Koletzko works with colleagues and students there on chassis technology, bodywork and electrification – just the right focus for the long-time BMW engineer. Before switching to an academic career, he was head of steering system development at the car maker.

It is precisely here that he sees another niche where Landshut University of Applied Sciences could position itself as a centre of excellence in the broader field of automotive engineering. "The automotive industry has great interest in replacing the mechanical connection between the chassis and the steering wheel with a purely electric steering control system", says Koletzko. "For the steer-by-wire system to be deployed as standard, among other things the force feedback – the driving experience at the wheel – needs to be generated by electric means. We want to work on that too."

Project work for the automotive industry

Using his industry connections Koletzko has already initiated project work for students of automotive engineering and commercial vehicle technology. This includes a project for a steering test stand in conjunction with BMW. "In industry there are lots of open questions, but there is no time in which to understand complex relationships in detail," he explains. "That is the aim of our research." Degree programmes such as Automotive Industrial Engineering and Automotive Computer Science will be involved on interdisciplinary topics.

Koletzko also has electric mobility and autonomous driving in his sights: "My vision is that sometime there will be a self-driving vehicle on the university campus." On a smaller scale, students at Landshut have long been driving model cars around on their own. Now expertise and people from all parts of the university will be brought together to make progress together in an interdisciplinary way. According to Koletzko, research around autonomous driving should also address issues such as how it feels for people to be driven by the car. Another issue is whether a new chassis architecture is needed if suddenly all vehicle occupants become co-drivers.

With research in fields such as e-mobility, lightweight construction, autonomous driving and digitisation, there are lots of possibilities for the university to become an automotive centre of excellence and service provider to the automotive industry. For students this means plenty of opportunities to engage in project work, dissertations and close collaboration with major industry players among manufacturers and suppliers. 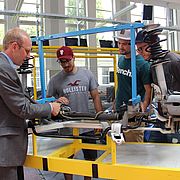