In his master’s thesis the alumnus of Landshut University of Applied Sciences developed a new error control process, for which he has been awarded the Kulturpreis Bayern (Bavaria Prize for Culture)

Landshut University of Applied Sciences is pleased to report about the achievement of its alumnus Simon Hartel, who was awarded the Kulturpreis Bayern in the category of science on Thursday. The prize was conferred to Simon Hartel’s master’s thesis on the subject of electrical engineering, which he completed as part of a research project funded by the Bavarian Research Foundation in cooperation with the Ortenburg-based specialists for measurement technology, Micro-Epsilon. Due to the lockdown, the prize was awarded in a digital format for the first time. The Kulturpreis Bayern is conferred by Bayernwerk AG and is endowed with 2,000 Euros.

Hartel has recently successfully completed his master’s degree in electrical engineering. In his thesis, which was overseen by Prof. Dr. Christian Faber together with his PhD candidate Hanning Liang, Simon addressed a high-precision procedure for the measurement and error control of reflective surface – known as “phase-measuring deflectometry”. In industry, this is used in the inspection of varifocal lenses for glasses, car body parts and smartphone displays, for example. During the procedure, several camera images at different levels of light are required, during which the objects to be inspected are not allowed to move.

The results speak for themselves

If an inspection is to be carried out while the objects are moving on a conveyor belt to the next production step, ambiguities will occur in the evaluation due to a lack of information.  In his project, Simon Hartel developed a contextual method for resolving these ambiguities. Faber is proud and impressed by the great success of his protégé. “Mr. Hartel invested a lot of hard work and dedication in his master’s thesis. Not only did he illustrate why the procedure which I originally proposed at the beginning of the project did not work well, he also came up with his own – much better – solution as an alternative,” explains Faber. The results speak for themselves. “The method he has developed solves an important problem in our research project for the inspection of bright surfaces in motion.”

The 24-year-old electrical engineer was hired by Micro-Epsilon after graduation, and plans to write his doctoral thesis in optical 3D measurement technology as part of a further research project with Landshut University of Applied Sciences. “To be awarded the Kulturpreis is a great honour,” emphasizes Simon. “The bronze statue will be on my desk in the future, motivating me to keep going in order to achieve my goals.” Simon expressed particular thanks to his supervisor, Prof. Faber, for the constructive and very close collaboration: “I'm sure that it will continue in the future.”

(free to use where source is indicated) 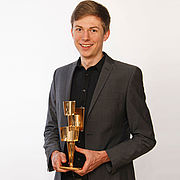