Smart displays off the printer

A shirt that communicates with the environment? Electroluminescent displays could soon make it happen. The strips of film can be integrated within clothing, and Maximilian Wurzer, a student at Landshut University of Applied Sciences, has developed displays like this as part of his Bachelor’s thesis.

Smart fitness watches that measure your pulse and count your steps have been around for a while now. These mini computers, which until now have been worn on the wrist or carried in a bag, are now being integrated within clothing. A new message appears every day on the display of a smart shirt and can be programmed and displayed by the wearer according to his or her mood - for example via electroluminescent displays, or ELDs for short. The show-stopping feature of this technology is that “The electronics are simply printed on a flexible medium, for example a film strip,” explains Professor Dr. Artem Ivanov from the Faculty of Electrical and Industrial Engineering at Landshut University of Applied Sciences. So far ELDs have mainly been used for display panels under difficult conditions in industry, for example in high air humidity or in the presence of mechanical stresses, and are correspondingly expensive.

“The resolution is nowhere near as good as that of smart phones or tablets,” says Ivanov. “Nevertheless, I can imagine that ELDs could be used in smart clothing, since they are flexible, robust and cheap to produce.” Maximilian Wurzer examined how this might work in his Bachelor’s thesis. “The aim was to find out how ELDs could be sensibly, safely and smartly integrated within clothing with the current state of the art,” says Wurzer, who studied Industrial Engineering.

To do this, first of all he designed and assembled the approximately five centimetre long display that would later adorn caps and t-shirts. It consists of five layers that he printed one after the other in the laboratory on the carrier films. “It’s rather like screen printing. A stencil is created for every layer. Paste is applied to it and the excess removed again,” explains Wurzer. “Without the help of the laboratory supervisors it would not have been possible.” They know exactly which pastes are suitable, how quickly they should be applied and how to adjust the parameters of the machine.”
The displays were created layer by layer. The key component is the two electrode layers: when alternating current is passed through them, an electric field is created. This causes the phosphor layer in between them, which consists of connected pixels, to illuminate and appear as blue shapes or lettering on the display. To avoid short circuits, Wurzer applied two further layers of insulating material. “On some displays we also applied a blue colour filter. This increases the contrast of the blue phosphor,” says Wurzer.

Voltage applied to the electrodes causes the display to light up. The student constructed a proprietary driver circuit for this. This can be programmed to determine when which pixel should light up. “This is also the special feature of the work. Until now there were no compact driver circuits for pixel-based ELDs on which different content could be displayed. This is something quite new,” says supervising Professor Ivanov. For this reason, Wurzer also had to address the safety specifications: “The higher the voltage the brighter the ELD. But if it is too high, the components cannot withstand it or it is too dangerous to wear the display on the body. If it is too low, the display will no longer light up,” summarises Wurzer. For this reason he set up resistors and individual components of the circuit in such a way that they can be touched safely. “Unfortunately the display lost a little brightness as a result.” The consequence: in the dark and in artificially illuminated rooms it is easy to see what appears on the displays. In the sunshine, the brightness of the phosphor layer is not quite adequate.

Wurzer has integrated his ELDs in a rucksack, shirts and caps. “The technology can be further developed and combined with other electronic control systems,” he believes. For example, in the field of e-health: “If a diabetes patient’s blood sugar level falls too low and they become unconscious, the blood sugar monitor could activate the display via a wireless transmitter integrated in the shirt.” The following message would then appear: “Diabetes patient with hypoglycaemia, please call an emergency doctor.” Ways in which the small screens might help to push medical technology forward could be further topics for final theses at Landshut University of Applied Sciences. 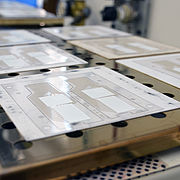 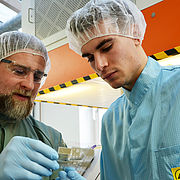