Nine formative years at the university

President Professor Dr. Karl Stoffel takes stock of his time in office at the General Meeting of the Friends of Landshut University of Applied Sciences.

On Thursday evening the Friends of Landshut University of Applied Sciences held a General Meeting which was attended by around 70 interested parties. The meeting was held by the Friends to say farewell to the University President, Professor Dr. Karl Stoffel, who will leave office on 14 March.

“We in the Friends association wish thank you for the past nine years,” said the Chairman, Ludwig Zellner. He looked back on the beginnings of the cooperation between him and the University President, which began almost simultaneously in spring 2011. The Friends have spent over €287,000 for the university over the nine years. For this, Zellner also thanked the members and donors. Among other things, the money was contributed to marketing, communication, events and the 40th anniversary celebrations.

A look back at nine years as President

Professor Stoffel took the opportunity of the General Meeting to sum up his time in office. In so doing, things came full circle for him, since on 17 March 2008, in the very room in which the General Meeting took place, he had delivered his first lecture. Professor Stoffel highlighted that the past nine years had not only been a formative time for him, but also for Landshut University of Applied Sciences. One thing in particular was always to the fore during his time in office: “The development of a university is a team effort, which is why I owe my thanks to all those who worked with me in supporting young people on the road to a successful future.”

Next Professor Stoffel touched on the changes and developments at the university from 2011 to the present day. Among other things these included the expansion of the field of continuing education, the establishment of the Faculty of Interdisciplinary Studies, the creation of eleven new degree programmes, construction programmes such as the administration and lecture hall building and the “CampusNest” as well as the setting up of a video studio for teaching. In the field of knowledge transfer (TRIO and INDIGO), as well as in support for entrepreneurs (Start-Up Night, LINK, EXIST, Potentials) a lot had happened at the university during Professor Stoffel’s presidency.

Professor Dr. Stoffel will not be lost to the university beyond 14 March, as he will be taking up the role of Professor of Controlling and Cost Accounting. However, he will first undertake a research semester immediately following his period in office. 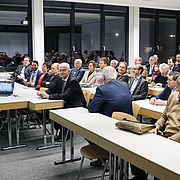 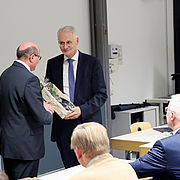 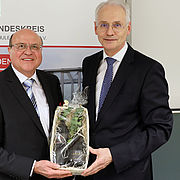 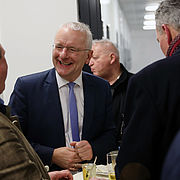 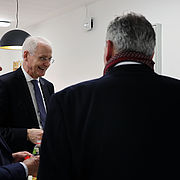