The university authorities are proud that a patent has been granted for a permanently excited synchronous machine with disc rotor which was developed in one of the university laboratories. The inventor, Professor Dr. Alexander Kleimaier of the Faculty of Electrical Engineering and Engineering Science is mainly responsible for obtaining the patent. "We have developed a novel concept for an electric machine,” Kleimaier explains, "a so-called axial flow machine with a non-ferrous disc rotor."

Its special feature is that it can be constructed in a very simple and modular manner and manufactured from standard components (so-called "U cores") and is capable of producing a very high torque in conjunction with an economical use of materials. It requires significantly less permanent magnetic material than conventional permanently excited machines.

The intention is to use the machine developed by Kleimaier as a traction motor in electric vehicles. "It is precisely where as little permanent magnetic material as possible is required that the cost and environmental benefits are seen," Kleimaier explains. Of course, there are also electric motors without permanent magnets, which completely avoid this problem – but they are heavier than permanently excited machines and are slightly less efficient.

A lot of hard work was needed before the patent could be granted: in the laboratory, for example, in the form of test bench experiments and then in computer simulations and analyses. Landshut University of Applied Sciences supported Professor Kleimaier by granting him a sabbatical term.

The research project "Ines Selma" has also been running at Landshut University of Applied Sciences since April 2019. In the course of this project, Professor Kleimaier is further developing the concept for a specific application in collaboration with his industrial partner Silver Atena from Landshut. 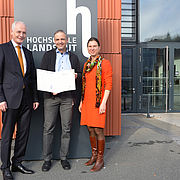