More Space for Teaching and Research

The red cube is the showpiece of the Landshut campus: “The new administrative and lecture hall building is symbolic of the innovative strength and success of Landshut University of Applied Sciences. And both are highly visible in Landshut. Since it was founded, this Lower Bavarian university has been following the road to success,” said Dr. Ludwig Spaenle, Member of the State Assembly, and Bavarian Minister of State for Education and Cultural Affairs, Science and the Arts, on Wednesday. The building was officially opened to the accompaniment of the timpani and trumpets of the Salzburger Trumeter historical marching band.

Spaenle: “University on the road to success”

?The tile-clad building is both smart and functional, since the architectural practice, pos-architekten zt gmbh from Vienna attached particular importance to sustainability. For example, the offices manage without air conditioning thanks to an automated sunscreen and sliding shutters that enable the rooms to be ventilated at night and when it rains. In addition, a photovoltaic plant covers part of the demand for electricity, and the high entrance hall with atrium provides daylight in the foyer and along the corridors.

?The Free State of Bavaria has invested around 9 million euros in the new building. In each of its two large lecture halls the modern lecture hall and administrative building has space for 120 students, and also contains five seminar rooms and 29 offices, as Reinhard Piper, head of the State Construction Authority in Landshut, explained. The space was urgently needed, as in recent years in particular, the university has grown rapidly and currently numbers around 5,200 students and in excess of 300 administrative and academic staff members and professors. “In the past we were only able to meet the demand for more room by renting additional buildings and with a temporary container building,” explained the President of the University, Prof. Dr. Karl Stoffel. In future the university hopes to expand further, as the Chancellor, Dr. Johann Rist added: “We plan to rent the social services building. And there are also plans for a new dining hall to be built to ease the burden on the current canteen.” Growth needs not just space, but also infrastructure, said Mayor Alexander Putz: “The expansion of roads and cycle paths should help the university and city to grow more closely together.” 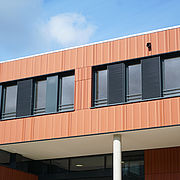 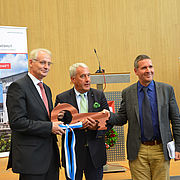 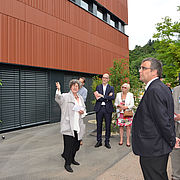 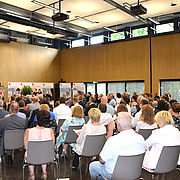 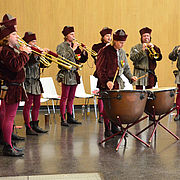