Under the auspices of the FORELMO joint research project, experts at the Landshut University of Applied Sciences have been carrying out research into how batteries in the electro-mobility sector are getting simultaneously stronger and safer.

The greater the energy density in a battery, the further it can propel an electric car. The problem with this, however, is that the explosion risk for batteries goes up in line with increasing energy density. Yet, in the course of the FORELMO joint research project, chemists at the Landshut University of Applied Sciences have discovered that using a different material for the cathode increases the safety of the battery.

The German Federal Government has set a target of a million electric cars on German roads by 2020: There are currently 55,000. However, many potential buyers are put off by the fact that these cars are more expensive than those with internal combustion engines. One initiative, among others, designed to help address this problem is the Environmental Bonus for which buyers can apply upon purchasing a battery-powered vehicle. The range is another frequently cited counter argument, whereby, depending on the specific model, one can cover up to 200 km on a single charge.

The decisive factor for both criteria is the heart and soul of the electric car – the battery! It needs to be compact, as light as possible, cheap and, of course, safe. Battery and materials experts are currently working on meeting these demands. "One goal", explains Prof. Karl-Heinz Pettinger, Scientific Head of the Technology Centre for Energy at the Landshut University of Applied Sciences, "is to increase the energy density of the batteries". The greater the energy density in a battery, the further it can propel a car. "The problem with this", the Professor of Energy Storage continues, "is that the fire risk for batteries increases in line with rising energy density". This is because the energy storage device, usually a lithium-ion battery, generates heat. Any short circuit or failure to cool it efficiently will trigger a fatal chain reaction in which oxygen leaches out of the material, which ignites internally resulting in the battery's catching fire or exploding. Battery experts such as Pettinger refer to this as thermal runaway.

Electric drive units should be efficient, safe, and economical – which happens to be the motto adopted by FORELMO – a German abbreviation for the Bavarian Research Cooperation for Electric Mobility. Over the course of this three-year project, which finished recently, partners from industry and academic research worked on the development of efficient propulsion units and high-performance electronics. Other academic institutes involved in addition to the Landshut University of Applied Sciences were the Technical University of Munich, the Fraunhofer Institute for Integrated Systems and Device Technology IISB, and the Georg-Simon-Ohm Technical University in Nuremberg. Among others, some of the partners from industry were Johnson Matthey Battery Materials, Infineon Technologies,TÜV SÜD Battery Testing, and EPCOS.

Together with his research team, Pettinger, a chemical scientist, tested an alternative material for the cathode, a small but essential battery component. Instead of a nickel alloy, as found in 95 per cent of existing batteries, the scientists used a lithium ferro-phosphate compound produced by Clariant, a chemical group and project partner. "This compound does not release oxygen, which could cause it to ignite",  Dr. Pettinger explains: "That makes the battery safer!"

Yet, a novel material alone is not enough. Processing technologies would need to alter its consistency, because, for cathode manufacturers to be able to easily integrate it into existing manufacturing processes, the particles would need to be at least a few micrometres across. By contrast, particles of the lithium ferro-phosphate compound were originally much smaller, i.e. the material was too fine a powder, which is difficult to measure out accurately in large-scale production facilities. "Not only that", Pettinger goes on to say: "one would have to use more binding agents and solvents, which reduces the quality of the electrodes". He and his colleagues at Johnson Matthey Battery Materials succeeded in optimising the powder for use in the relevant processes – and, therefore, for use in industrial applications. "Based on the results of the research project", Pettinger explains, "we are putting together a specification sheet, a kind of recipe, for how battery manufacturers can utilise this cathode material". Pettinger will continue to blaze the trail towards more electro-mobility in Germany, as the Federal Ministry of Education and Research recently appointed him to the Scientific Committee for Battery Research in Germany, where he will provide the ministry with expert advice in relation to its support for particularly promising projects in the field of battery science. 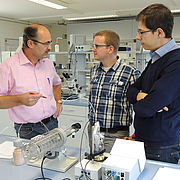 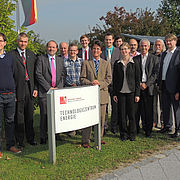