Industry trends of the future at IntraSmart 2019

On Tuesday, 24 September, IntraSmart – the trade show and congress for intralogistics – attracted professors, companies and decision-makers from industry to Landshut University of Applied Sciences’ technology centre (TZ Puls) in Dingolfing for the third time. In his welcome speech, Herbert Stadlbauer, chairman of the advisory board of TZ Puls, expressed his pleasure that IntraSmart is now a firm fixture in companies’ calendars and that a total of 27 exhibitors were there to present themselves at IntraSmart.

This year’s theme was about managing growth and scaling processes, technology and people, with digitalization experts devoting themselves to the question of how intelligent working processes and the human-machine interface can be designed in the digital age. There were eighteen special presentations to give some 120 decision-makers from industry new ideas for production and process optimization. The topics covered included smart production, critical infrastructures and lean management.

The three keynote speakers, Dr. Andreas Schmid from Funkwerk AG, Bastian Nominacher, CEO of Celonis SE, and Hans-Walter Borries, deputy chair of the BKSI (German Federal Association for the Protection of Critical Infrastructures) were the highlights of the conference programme and addressed some thought-provoking and pioneering themes. Schmid drew on one hotly debated topic in his keynote speech: He talked about artificial intelligence, the latest developments and the impact they are already having on production planning. Schmid summed up that AI is no “panacea but is a sensible addition to optimizing business processes.”

IntraSmart once again enjoyed the political support of the Bavarian state minister for science and the arts, Bernd Sibler, who was patron of the event. Born in Lower Bavaria, he gave a video message in which he emphasized the importance of the trade show and TZ Puls for the future of business and research in the region.

Number of exhibitors and presentations up

This year’s IntraSmart once again recorded growth in the number of exhibitors and presentations given. The numerous visitors were able to make valuable business contacts and gain inspiration for their own companies. 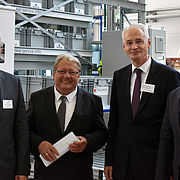 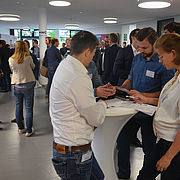 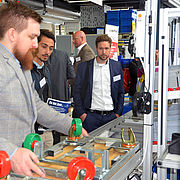