Eminent visitor in Landshut – The President of the Landshut University of Applied Sciences, Prof. Dr. Fritz Pörnbacher welcomed the Israeli Consul General, Sandra Simovich to the campus at the end of August. Simovich has been responsible for Southern Germany as the Head of the Consulate General since 2017 and has been visiting colleges and universities regularly since then. The reason for this is to sound out joint projects and further collaboration opportunities.

A guided tour of the campus gave Simovich the opportunity to get to know important university facilities better. Among others, the coordinator of the incoming programme, Julia Daschner and the International Office and project manager Eva Rohrmüller presented the university's own start-up centre. In addition, co-founder Stefan Blöchl gave a presentation on the "IFOX Systems" start-up, which is developing a new controlling methodology. At the end of the tour, Prof. Dr. Jörg Mareczek gave insights into his robotics laboratory. The laboratory is located in the Faculty of Electrical Engineering and Industrial Engineering and is equipped with anthropomorphic and humanoid robots.

Simovich followed the presentations by the university members with great interest and had two exciting projects up her sleeve herself. For example, she told Pörnbacher about the "New Kibbutz" internship programme, which was established on the initiative of the Consulate General together with Bavaria and other German states. The cooperation project has been bringing German students to Israeli high-tech start-ups and companies for internships for five years. More than 100 German students have been to Israel with the programme by now. The internship lasts between three and six months. Current internships can be looked up on www.newkibbutz.de.

The Israeli consulate is also involved in accelerators. These programmes aim to bring together German and Israeli students and young professionals. They then solve the challenges set by companies as a group. After getting to know each other for the first time in Germany or Israel, the participants receive their assignments. "The groups work on the project and regularly exchange information virtually over a period of two months," explained Simovich. At the end of the programme, the accelerator members fly to the other partner country, collate the results and present them to the companies.

The President of the Landshut University of Applied Sciences sees great potential for the university in both projects. "This opens up very interesting prospects for our students to gain experience abroad and to benefit from working in an international team." 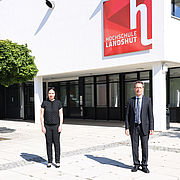