For greater tolerance and anti-discrimination

Members of Landshut University of Applied Sciences discuss measures for a broader understanding of diversity in a round table event.

At the end of last year, the press media reported the sharing of racist and anti-Semitic comments among a WhatsApp group of students at Landshut University of Applied Sciences . The University management has already been aware of the case which had been reported on the 8th of November. On the 8th of January 2020, University President Prof. Dr. Karl Stoffel took this incident as an opportunity to convene a "round table for greater tolerance and anti-discrimination". The meeting was attended by the University management, the faculty deans, the University chaplain, Landshut University of Applied Sciences’ Diversity Representative, the International Office managers as well as student representatives.

“As a university,” Stoffel emphasised, after briefly describing to those present what had happened since the incident became known, “we totally dissociate ourselves from the content shared in that WhatsApp group.” The purpose of the round table event was to give all participants the opportunity to share their reactions and discuss potential ways to raise awareness as well as a better understanding of diversity within the University community.

A lot of good ideas with great potential

Everyone present participated actively in the discussion and tabled their own suggestions. The student participants already have some concrete ideas about a poster campaign geared towards understanding cultural diversity within the University, and were able to present some initial drafts. The other participants also tabled some promising ideas including project weeks aimed at tightening up the house rules in the event of future acts of discrimination and relaunching the Initiative Gegenkraft (counterforce initiative).

Various diversity showcases, which will be distributed around the campus, as well as the creation of a dedicated contact and coordination office, and a new university survey on discrimination, were also discussed in the meeting. Stoffel was enthusiastic about the plethora of ideas and suggested reconvening the round table in April, where the proposed measures could be worked out in more detail. All those present agreed that the aim of all relevant measures should be to support open-minded people resolutely opposed to such ideologies. 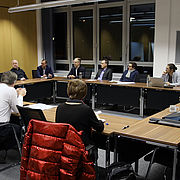