Faculty of Social Work with a nationwide presence

"We are very honoured that the members of the DSGA have re-elected us to the board," emphasise Thiessen and Borrmann," and we look forward to continuing the professional association's work in the next two years as members of the board."

Due to the Covid 19 pandemic, the DGSA's general meeting was held online. The voter turnout was higher than ever before. 32.27% of those eligible to vote cast their votes online between 29 June and 13 July and re-elected all members of the eight-member board.

The Deutsche Gesellschaft für Soziale Arbeit is the scientific professional association of social work and represents about 900 members. Founded in 1989, it is dedicated to the promotion of social work as a discipline and profession. The DGSA also sees its remit as actively contributing to socio-political debates with its expert contributions and promoting international collaboration. 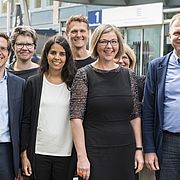