„Everyone wants everything, and preferably right now“

More evolution than revolution: for Joachim Drees, Managing Director of MAN SE / MAN Truck & Bus AG, digitalisation represents a development rather than a sudden upheaval. Drees was addressing the Entrepreneurs' Conference last Tuesday at Landshut University of Applied Sciences, and was explaining how the company wants to integrate the mobility and logistics sectors.

“Mobility is among the mega topics of our times” said Professor Dr. Karl Stoffel in his welcoming speech to the 90 or so participants at the 2018 Landshut Entrepreneurs' Conference, most of whom were representatives of companies and the municipality. According to Drees, mobility, and logistics in particular, is in a state of permanent change because of digitalisation. “The Internet is driving Industry 4.0, but this necessitates excellent logistics", he explains, adding that this is the only way for logistics companies to cater to the ever increasing demands of their customers. “Everyone wants everything, and preferably right now” he concludes. “The new economy has morphed into the now economy, And the utility vehicle industry must also react to the situation". Drees envisages a global integration of the entire supply chain.

According to Drees MAN is working on various solutions. One concept involves the use of driverless delivery vehicles. “When will we see the first driverless trucks on German roads?” asked Professor Stoffel, to which Drees responded that “there probably won’t be any driverless lorries on the Autobahns before 2030”, going on to say that “the technology will be introduced gradually”. MAN, for example, initially plans to test driverless lorries at company depots. These vehicles would drive themselves from the main gate to the unloading bay, whilst the driver used the time for a rest break.

As Drees went on to explain, many additional developments will be necessary to create a fully driverless truck. “Our utility vehicles”, he says, “are already part of the so-called Internet of Things”. Integrated sensors, for example, are continuously capturing data from vehicle components. The driver is notified whenever a part is on the brink of wearing out, and is also told which repair shop to drive to. In addition, MAN introduced the RIO brand in 2016, which integrates all participants in the supply chain – from the sender to the forwarding agent to the haulier to the dispatcher and driver and through to the recipient – via a standardised information and application system,

Yet, according to Drees, integration and digitalisation are not enough: vehicle engines also have the potential to be optimised. “What the diesel debate tells us is that we have to develop alternative engines”, he explains. On the other hand, MAN’s CEO considers an outright ban on diesel engines to be impracticable, stating that: “there isn’t going to be a comparable solution in the long-distance transportation sector any time soon”. Local transport firms in Munich already trialled the first electric-powered MAN busses last year.

“Our aim”, Drees summarises, “is to digitalise the entire logistics value creation chain, to which end MAN is investing heavily. However, it is not yet possible to predict which technologies will actually become established over the coming 20 to 30 years”. That is why he referred to the much vaunted digital revolution as being more evolutionary than revolutionary. Digitalisation is a process that is still far from reaching its end. 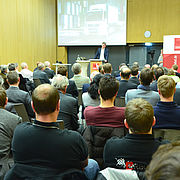 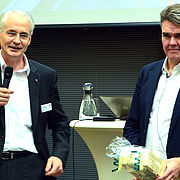