From the Black Forest to the Black Sea: The Danube is one of the oldest European trade routes and connects ten countries as the second longest river in Europe. It also takes on this role in the new DanuP-2-Gas research project, which aims to drive the energy revolution forward throughout the Danube region. Headed by the Technology Centre Energy (TZE) at Landshut University of Applied Sciences, researchers from 14 partner companies and institutions are developing a comprehensive concept that includes all ten countries along the Danube and should lead to a standardised generation and storage strategy for renewable energies in the region. Their idea: To promote the coupling of the electricity and gas sectors, to include currently unused energy sources and to develop an effective alternative to fossil energy sources (in particular to fossil natural gas) by producing renewable natural gas (RNG). This ambitious project is funded by the European Regional Development Fund (ERDF) and the Instrument for Pre-Accession Assistance (IPA). The total project sum is approximately EUR 2.5 million.

"Although the Danube region has huge potential for the sustainable production and storage of renewable energies, the share and efficiency of these renewable energies has been low here so far," explains project lead Prof Dr Raimund Brotsack from TZE, "this makes the region dependent on energy imports." This is where the new research project comes in. The researchers' concept is to store energy from biomass and renewable energy sources, such as solar and wind power, in the form of renewable natural gas in the long term. "This is unprecedented," says Brotsack. This specifically means: unused organic residues such as wood are processed into biomass, brought to central hubs via the Danube transport route and converted into RNG of natural gas quality using renewable energy from wind and sunlight. The RNG produced in this way can be distributed and used throughout Europe via the existing natural gas network. This reduces the use of carbon-based energy sources. The consequences: Less CO2  greenhouse gas gets into the atmosphere and the region is less dependent on fossil gas imports.

Technology can be used straight away

The energy stored in RNG can then be used in the various sectors of heating, electricity and transport without the need to convert the technology in existing plants. Dr Tim Bieringer, employee at TZE, explains: "An existing gas or steam power plant that produces heat and electricity from natural gas can be operated with RNG in the same way as with fossil natural gas." For this purpose, the researchers are evaluating the biomass potential and existing infrastructure in the Danube region and publishing the processed data in a "Renewable Energy Atlas", which is accessible to all interested stakeholders.  "The fact that this technology can be used straight away makes the project interesting for both investors and consumers," adds the project lead, "because it ensures us a stable energy supply with climate-friendly natural gas."

The central basis for the research project is the Danube Energy Platform, which was developed during the ENERGY BARGE project. This cooperation network brings together energy agencies, economic operators, authorities and research institutions, involves them in the processes and enables them to exchange information and raise their profile. Another of the research project's remits is to examine the political and legal situation in the ten countries. To this end the project partners are cooperating with representatives from politics, business, research and development to develop a long-term strategy for the entire Danube region, which all countries will benefit from.

Finally, the researchers are developing two tools to underline the economic feasibility of the concepts. They enable countries to identify potential locations for so-called "Sector Coupling Hubs". An optimisation tool shows the specific requirements of each site and recommends suitable plants and operating methods. "This saves future investors the initial analysis," explains Brotsack, "and the stakeholders themselves can ultimately develop follow-up projects to actually build plants."

The "DanuP-2-Gas: Innovative model to drive energy security and diversity in the Danube Region via combination of bioenergy with surplus renewable energy" project runs from 2020 to the end of 2022. The project is being led by the Technology Centre Energy (TZE) at Landshut University of Applied Sciences. 13 other project partners and 10 associated partners from a total of 12 European countries are also involved in the research project. The project is being funded by the European Regional Development Fund (ERDF) with over EUR°2.1 million and by the Instrument for Pre-Accession Assistance (IPA) with over EUR°61,300. The total project sum is approximately EUR°2.5 million. 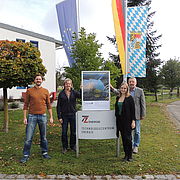