A great opportunity to broaden your horizon

Jasmin Berger talks about her internship abroad in Brussels

In an increasingly interconnected world, opportunities to live, study or work abroad are in considerable demand. The practical part of a course of study is considered very important at Landshut University of Applied Sciences, and many courses include a compulsory internship abroad. And as Jasmin Berger is pleased to report, everything still worked out, despite the current pandemic. Jasmin studies International Business and spent a semester in Belgium, where she worked at a rapidly-growing tech company in Brussels in the area of online marketing.

The student at Landshut University of Applied Sciences found her internship through Linkedin. “The company wrote to me and offered me the placement,” recalls Jasmin Berger. “I was very impressed.” Her decision in favour of Belgium was very easy for many reasons, however, not only because of its multicultural society and interesting history. “Belgium is also very innovative and several EU institutions are based there.” Another factor of interest for Jasmin Berger was the opportunity to improve her language skills.

Understanding and applying the global world of marketing

“My basic remit was to help strengthen the company’s online English language presence and to help prepare the marketing strategy for the launch in the German market,” explains Jasmin Berger. One of her projects was helping to redesign the website and translate the content into German. The completion and evaluation of online campaigns as well as other trend market analyses also allowed Jasmin Berger to gain useful experiences during her time abroad.

Just like everyone who has to make their way in a foreign country – not least during a pandemic – the student from Landshut faced some challenges: finding accommodation, for example. “Fortunately, Facebook, AirBnB and video calls ensured that that wasn’t a problem,” says Jasmin Berger. Finding social contacts was a far bigger challenge, however. In Belgium, people were generally required to work from home during the pandemic. “That made it difficult to meet people and get to know the culture of Belgium through them,” she emphasizes. Her employer made special arrangements, however, and ensured that the team got to meet regularly online and sometimes in person as well. Jasmin Berger didn’t experience any problems when it came to communicating: “In Brussels and the Flemish Region, lots of people speak English or even German. As a European, I never felt foreign in Belgium!”

The Landshut student enjoyed her time in Brussels a lot. She also learned how to convince the management team of her ideas. “I also met a lot of fun and talented people, including friends that I’ve made for life,” says Jasmin. “The best part, however, is that despite the pandemic, I also met my fiancé there.”

Jasmin strongly recommends spending some time living abroad. “In an interconnected world, learning about and understanding other cultures so as to solve and avoid conflicts and so we can all live and work together successfully is more important than ever before,” says Jasmin, summarising her experience. And every exchange with others is an opportunity to broaden your horizons, to learn with and from others, and to become more open-minded and more tolerant.

If you would like to find out more about the possibilities for spending some time studying or working abroad, you are welcome to contact the International Office at any time. An overview of what is on offer is available at www.haw-landshut.de/io.

(free to use where source is indicated) 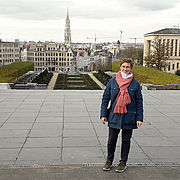 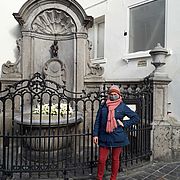